Splitwise is an app for keeping track of shared expenses on group trips. You enter all the transactions from the trip, and then the app will tell each person how much they owe each other person in the group.

In addition to being useful, Splitwise also inspires an interesting CS problem, which is: given a list of transactions, how do you efficiently calculate the minimum number of payments that are necessary to settle everyone's debts?

For example, let's say Alice, Bob, and Carol take a day trip. Alice covers breakfast which is $30 total, Bob covers lunch which is $60, and Alice covers dinner which is $90. This means that Bob and Carol each owe Alice $10 for breakfast, Alice and Carol each owe Bob $20 for lunch, and Alice and Bob each owe Carol $30 for dinner. However, the optimal solution is not to have each person pay everyone else, for a total of \(6\) payments. Instead, Alice just needs to pay Carol $30, for a total of \(1\) payment, to settle everyone's debts. To see why, observe that after Alice pays Carol $30, everyone will be out an equal amount of $60.

I spent some time thinking about this problem. One observation is that the specific transactions don't actually matter, all that matters is each person's net amount, which can be positive or negative. If they are net positive, that means they owe money, and if they are net negative, that means they are owed money. By this convention, in our example above Alice is net $30, Bob is net $0, and Carol is net -$30, which makes it easy to see the optimal solution.

Formalization of the "Splitwise Problem"

Based on our observation, we can formalize the "Splitwise problem" as follows:

To start, we need to show that the problem is in NP, which means that if the answer to an instance of the Splitwise decision problem is "yes", then there is a proof that is verifiable in polynomial time. Indeed this is the case, because as proof we can provide the list of \(E\) exchanges. To verify the proof, we just need to apply each exchange and check that all values are \(0\) afterwards, which can be done in linear time with respect to \(E\) and \(N\).

Next let's prove the backwards direction: if the answer to the Splitwise instance is "yes", then the answer to the corresponding SSP instance is "yes". Because there are \(S\) positive values in \(x\) and only \(S\) exchanges, that means each positive value must be part of exactly one exchange, which turns that positive value to zero. If there is an exchange from borrower \(i\) to borrower \(j\) of value \(x_i\), and then an exchange from borrower \(j\) to a lender (e.g. \(S+1\)) of value \(x_i+x_j\), that is equivalent in number of exchanges to if \(i\) and \(j\) each paid \(S+1\) directly. Therefore, we can assume that every exchange is from a borrower to a lender with the entire value that the borrower originally owed. Then, we can just take the set of indicies \(a \in A\) such that there is an exchange from \(a\) to \(S+1\). Because \(x_{S+1} = T\), this set of indices gives us a subset that achieves the target sum in the corresponding SSP problem, which proves the backwards direction.

We have shown that the Splitwise problem is both NP and NP-hard, which means it is NP-complete.

How does Splitwise work?

We've proven that the Splitwise problem is NP-hard, so Splitwise doesn't have an efficient polynomial time solution to minimize the number of payments (unless they've secretly proven \(P = NP\)). What do they do then? There's a couple possibilities - either they use an inefficient exponential-time algorithm, or they use a polynomial-time approximation algorithm. Let's figure out which is the case! First thing to note is that Splitwise by default doesn't actually try to minimize the number of payments, but offers the option to do so via a "simplify group debits" toggle:

Let's see how Splitwise handles our original example with Alice, Bob, and Carol. I'll replace Alice with myself. Here's the setup:

With "simplify debts" enabled, Splitwise does propose the optimal solution of \(1\) payment: 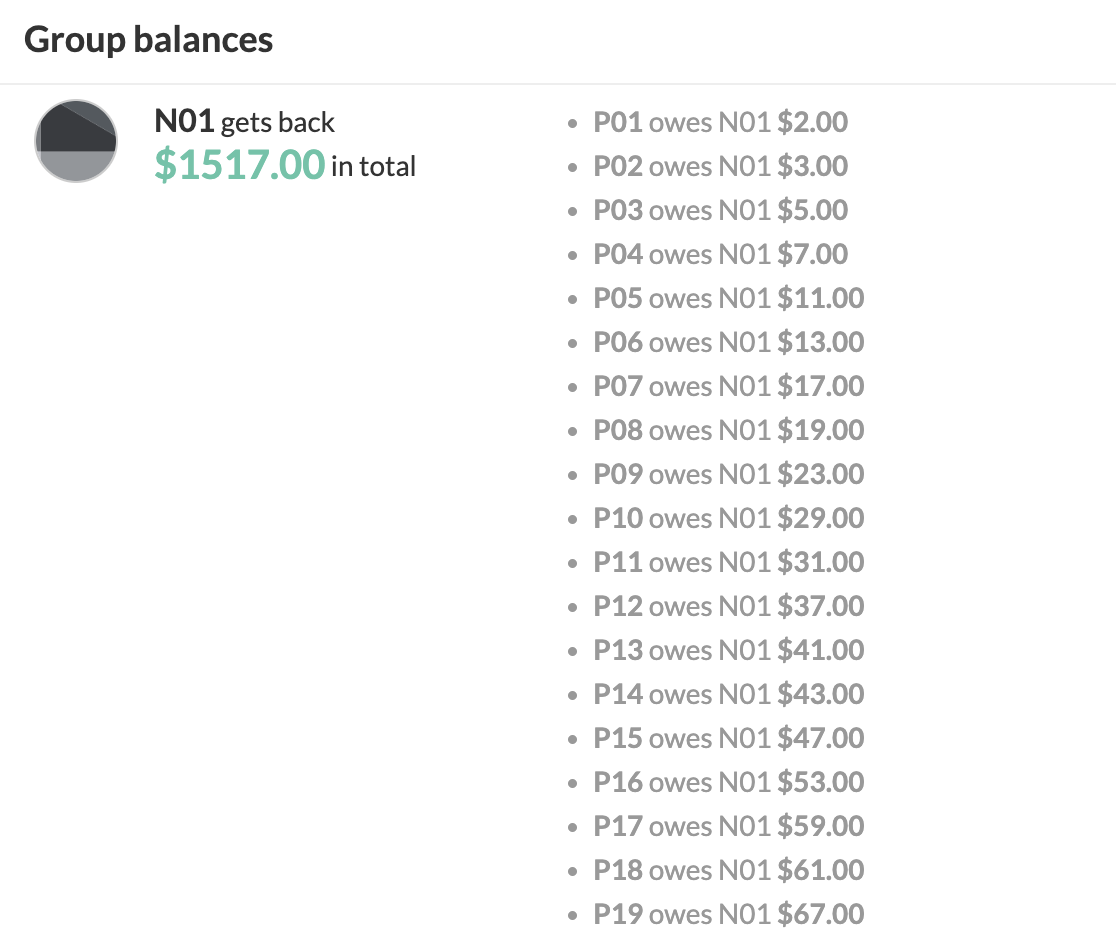 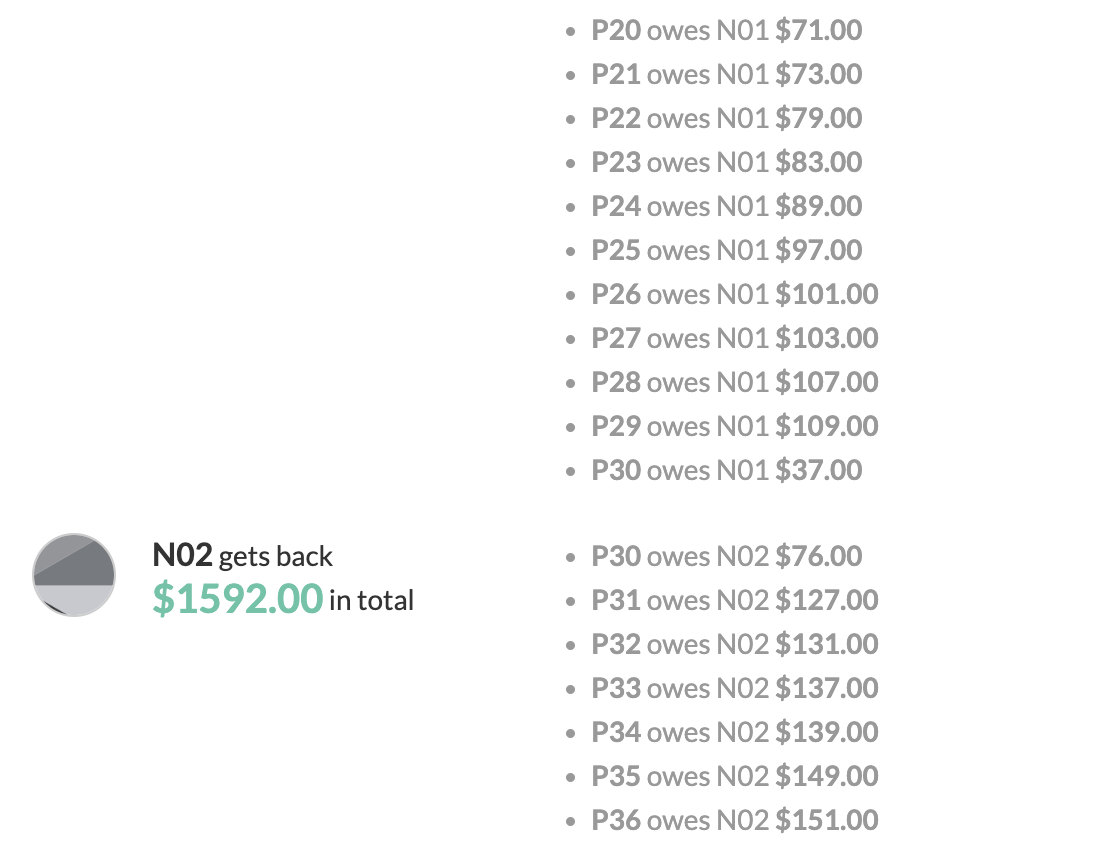 Therefore, it appears that Splitwise uses a greedy algorithm that pays one lender at a time. It runs quickly but does not always produce the optimal answer.

The funny thing is that if you disable "simplfy debts" for this example then Splitwise will actually output the correct answer of \(40\) payments :) This is because we only inputted 40 transactions, so Splitwise can just reverse each transaction. It's as if we gave Splitwise the "proof" that \(E = 40\) is satisfiable, so it could verify it in polynomial time.